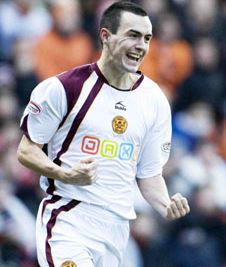 Marc Fitzpatrick progressed through the Motherwell youth system. As a seventeen year old he started to appear on the bench during the 2003/04 season, the day after his 18th birthday he would make his debut when he came on as a substitute in a 1-1 draw with Celtic.

Capable of playing at left back and in midfield, the youngster would feature more readily during the 2004/05 season. The highlight of course was scoring the winner in the 120th minute in a League Cup Semi Final tie against Hearts at Easter Road, which remarkably was also his first senior goal. His first league goal quickly followed suit as he netted against the same  opposition only eighteen days later in a 2-0 win.

Marc’s first season as a regular proved to be quite eventful, despite firing the club into their first national final since 1991, he would ultimately suffer disappointment in the final itself as the side fell to a 5-1 defeat at the hands of Rangers. Additionally, on the last day of the season he played in the 2-1 win over Celtic which famously denied them the SPL title as Scott McDonald netted a very late double.

Fitzpatrick proved to be a neat and tidy player, he struggled to win over some of the support at times as they perhaps looked for him to replicate the way in that he had burst onto the scene. His flexibility in being able to play in a number of positions made him a very useful squad player to have around. Alway reliable when called upon, Marc started 79 games and came off the bench no fewer that 64 times, scoring five goals.  He also represented the club in Europe after helping the side to a 3rd place SPL finish in 2007/08.

He moved onto Ross County in January 2011 after rejecting the club’s six month contract offer. In Dingwall he helped the Staggies win the First Division title and in the process helping them to the top tier of Scottish football for the first time in their history. Furthermore, Marc was part of the side which won the 2011 Scottish Challenge Cup.

Later in his career he would also serve Queen of the South, Greenock Morton and Airdrieonians where he was the club captain. He was capped three times with Scotland u21’s.