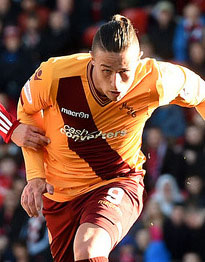 Plucked on a free transfer at the beginning of the 2015/16 season from English League Two side York City, Striker Wes Fletcher had previously been on the books at Manchester United and Liverpool as a schoolboy, but it was Burnley who offered him his first contract. Wes would spend the majority of his time at Turf Moor farmed out to various clubs but never really hit the goal trail at any before being allowed to move on.

When Ian Baraclough signed him on a one year deal the club inserted a clause into his contract that a second year could be added if he impressed enough, in truth he done well in pre season, he had a willingness to chase down lost causes but his main threat was in an around the box as he was in the old fashioned penalty box striker mould, Wes would net on the opening day of the season in a win over Inverness, but an injury sustained in the following match would keep him out of action for over month, by the time he returned to action he had to compete for a place against the likes of Scott McDonald, Louis Moult, Theo Robinson and David Clarkson.

His time at Fir Park was mainly spent nursing numerous knocks, he was released at the end of the season having only made 14 appearances scoring the one goal.

Fletchers next port of call was joining Welsh outfit The New Saints, he would make a brief return to Scottish football competing in the newly revamped Challenge Cup competition where Welsh and Irish clubs were allowed to compete, TNS of course enjoyed a lengthy run getting to the Semi Final where they were knocked out by St Mirren. Wes would also help the club beat Ajax winning record during the season 2016/17 season which had previously been set by the Dutch club in 1972.