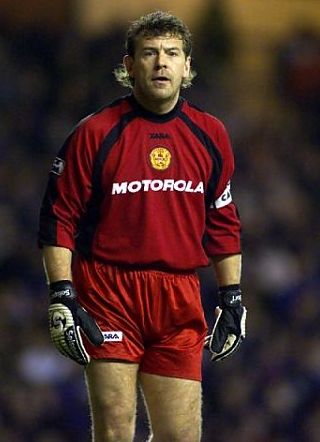 Andy Goram started his career with Oldham Athletic in England and he made excellent progress while he was there, he got capped at under 21 level and full international level with Scotland. Hibernian were quick to sign Andy for a fee of around £325,000 and he didn’t disappoint. Rangers stepped in from there and paid £1 million and he was a key figure in their nine in a row years. During his time at Ibrox he was hampered by knee problems among others, he was eventually freed by Rangers in July 1998. From there, he moved to England and had two brief spells with Notts County and Sheffield United before joining Motherwell in January 1999. While at Motherwell, he regained his finest form and showed some fine displays, he soon became Motherwell captain. Nearing the end of season 2000/01 he was offered to finish the season at Manchester United and he accepted, the ‘Well pocketed a cool £100,000.