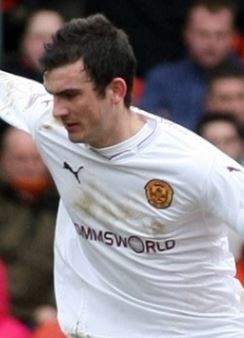 Dublin born Defender, Gunning came through the youth ranks at Blackburn Rovers, failing to make any real impact he was loaned out to Tranmere, Rotherham and Bury, before Stuart McCall brought him to Motherwell on loan at the end of January 2011. Capable of playing at left back or in central defence he proved to be a shrewd signing as the club needed more cover in those areas as Mark Reynolds was sold only a matter of weeks previously.

Gavin made his debut against Kilmarnock on the 2nd of February in a 1-0 defeat, he almost scored a stunning late equaliser but the ball agonisingly drifted narrowly passed the post. The youngster put in a number of fine performances and proved to be a favourite with the fans. He would feature on route to the 2011 Scottish Cup Final as the club put in some fantastic performances. Despite losing the Final, the highlight from a ‘Well perspective was perhaps his stunning long range effort which smacked the crossbar. Sadly he would have to settle for a runners up medal.

It wouldn’t be too long before he was back in the SPL, as he would sign a three year deal with Dundee United in the summer. He was part of the deal which saw Utd’s David Goodwillie going to Blackburn Rovers. Gavin has been capped at U17, U19 & U21 level by Republic of Ireland.