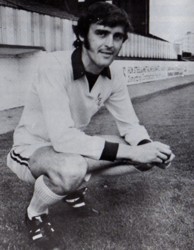 A tall, powerful and skilful striker, John Goldthorp was plucked from the juniors in the summer of 1967 by manager Bobby Howitt when he signed him from Lesmahagow Juniors.

The forward made his ‘Well debut a couple of games into the 1967/68 season when he featured in a 1-1 draw against Dunfermline Athletic in September, John would net his first senior goal only a week later in a match versus Dundee but ultimately the side fell to a 1-2 defeat.

Despite making a decent impression early in his Motherwell career, a thigh injury suffered in November would keep him out until March in a season that would see the club disappointingly slip to relegation.

Initially it was hoped that Goldthorp would fill the void left in the side by Joe McBride who had departed for Celtic, but it would take slightly longer than expected for him to dislodge the like of Dixie Deans and Jackie McInally from the centre forward berths.

After an impressive finish to the Second Division which saw John net 9 goals in the last 8 games of the 1968/69 season as the club made an immediate return to Scotland’s top flight, it was at this point that Goldthorp became a regular starter for the side with McInally being the player who would lose his place in the side. The emergence of Jim Muir would of course present another challenge for John but again he would be able to see off the competition but it was the eventual partnership of Bobby Graham and Willie Pettigrew which essentially put paid to his Motherwell career.

Perhaps the highlight of his stay at Fir Park came in the Texaco Cup when Motherwell played Stoke City who had one of the worlds best keepers plying their trade for them in the shape of Gordon Banks, the goalie lived up to his world class reputation as he kept the Steelmen at bay with a magnificent performance in the 1st leg, that of course was until Goldthorp managed to net for the ‘Well in a fine 1-0 victory.

When interviewed by the clubs official programme in 2005/06, John admitted it was a fine moment but it was another goal that stood out for him and that was in a League Cup tie in 1973 when the side beat Celtic 1-0. John had gained possession of the ball around the half way line, he danced past a number of Lisbon Lions, before dispatching the ball into the trademark postage stamp corner for a famous win at Celtic Park.

After an eight year association with Motherwell, John left the club to join Morton, a side who were exciting to watch at the time lead by Benny Rooney. He would enjoy a tremendous debut for the Cappielow club as he scored the winner in the 1976 New Year day Renfrewshire Derby, the perfect way to endear yourself to your new fanbase.