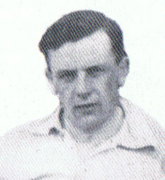 Born in nearby Craigneuk, it was with local junior side Shieldmuir Celtic that outside right James Healy began his football career. A number of clubs had been courting him including Motherwell, but after a trial with Celtic he opted to sign for them in April 1924. He struggled to make any real impression early on in his career at Parkhead and he would spend various short loans at Montrose, Stenhousemuir and Motherwell. At Motherwell he played in two league games but in truth made little impact at any of the clubs he served between 1924 and 1925.

After one year with Celtic he was allowed to leave the club, he subsequently joined Plymouth Argyle whom he played for five seasons. He passed away in December 1969 in Craigneuk.