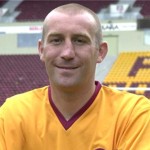 Nicknamed ‘Flipper’, Jim Hamilton was a man who plied his trade with many clubs in Scotland. His highlight perhaps was winning the Scottish Cup with Hearts at the end of the 1997/98 campaign.

Terry Butcher was keen to bolster his attacking options as the club were in pursuit of a top six finish in the SPL. Jim arrived at Fir Park at the end of January 2005, he had been playing with SPL rivals Livingston and had been on fine form having scored 7 goals. He would make his ‘Well debut vs Dundee in a 2-1 defeat.

Despite being pitched straight into the first team to partner Scott McDonald he found goals hard to come by, when he did finally get his name on the scoresheet what a cracker it was, only a matter of yards in the Aberdeen half he launched an unstoppable volleys which deceived keeper Ryan Esson and landed in the net as the Steelmen recorded a fine win up at Pittodrie. This however would be his only goal in claret & amber during the campaign.

The 2005/06 season would prove to be more fruitful for the big striker as he would amass 11 goals throughout the season. Amongst these was a stunning goal against Celtic in January 2006 which won the goal of the season award and would later win SPL goal of the decade.

As Terry Butcher moved onto pastures new, his assistant Maurice Malpas became the new Motherwell manager. Despite featuring in a few early games under his tenure, Jim just didn’t seem to fit into Malpas plans and was allowed to leave and join Dunfermline Athletic. He struggled at East End Park as the pars would slip to relegation. Typically he did however get on the scoresheet as Dunfermline beat Motherwell 4-1 as the season drew to a close.

He featured as a late sub as the Pars got to the Scottish Cup Final but sadly Celtic snatched the cup with a late goal. Jim would have a brief stint in the SPL again in later years with St Mirren but as his career wound down he would drop down a division.