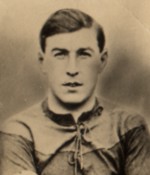 Born in Motherwell in 1897, John Hart started his football career with Larkhall Thistle before joining Motherwell in 1918. His initial stay at Fir Park was brief as he moved onto Rangers, he also served Hamilton, Albion Rovers and St Johnstone before returing to Motherwell in 1921 where he would make only 20 plus appearances in a three year spell. John would finish his career in Tayside serving St Johnstone again before moving onto Dundee United where he managed to carve out a regular starting berth making over 100 appearances. John died on the 29th June 1963.