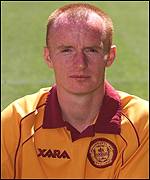 Midfielder, Paul Harvey signed for Motherwell shortly after the infamous 5-6 defeat at the hands of Aberdeen on the 25th October 1999. Despite Billy Davies having the rare luxury of spending big during his managerial reigns at Fir Park he did enjoy the occasional bargain basement buy as Harvey was plucked from Queen of the South who were playing in the Scottish First Division for a nominal fee. Paul made his Motherwell debut in October 1999 as the side beat Dundee United 2-0 at Tannadice. Regular starts were had to come by but when he was called upon he could be relied upon to do his part for the side.

Paul had started his football career at Manchester United as an apprentice before moving back to Scotland where he joined Clydebank, at Kilbowie he made over 230 league appearances before signing for Airdrieonians for a fee of £150.000. While at Broomfield he won the B&Q Challenge Cup. Upon departing Motherwell in 2002 he had a brief spell with Stenhousemuir, before joining the new guise of Airdrie, he brought the curtain down in his career at Queen’s Park.