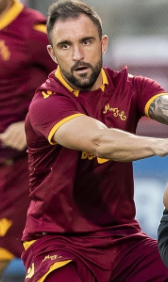 Centre back, Peter Hartley signed for Motherwell on a season long loan deal from Blackpool on the 31st August 2017. He had actually only signed for the Bloomfield Road club in June who had beaten the Steelmen in securing his signature but with no guarantee of first team football he was allowed to leave, at Fir Park he became an instant hit. Not only was he a robust tough tacking defender but he was also dominant in the air, comfortable with the ball at his feet and a nuisance to defenders in the oppositions box.

Peter made his debut in a 2-0 win over Kilmarnock at Fir Park, he scored his first goal for the club in a fantastic 3-0 win over Aberdeen in the Quarter Final’s of the League Cup, he also scored a winner in a Lanarkshire Derby which no doubt enhanced his likability amongst the support. Hartley was also unlucky not to net in the League Cup Semi tie against Rangers as his header ricocheted off the bar but his team mate Louis Moult was on hand to lash home in a famous 2-0 at Hampden. However he would have to settle for a runners up medal in the final as the side were defeated by Celtic in controversial circumstances.

He was red carded after full time in a match against Hamilton Accies in December 2017 when he flattened the unlikeable Dougie Imrie.

Hartley gained some worldwide attention in January 2018 when he signed on a permanent basis, the video the club created to announce it was a parody of the one Manchester United had released to announce the their big signing Alexis Sanchez, the video amassed well over 10 million views after going viral. In it he played a small piano and is presented with the hashtag ‘#Pete6’.

Despite the delight of signing on until 2020, he suffered an innocuous foot injury while out jogging, despite seeing a specialist he wouldn’t play another first team game that season, he did however appear as an unused sub in the 2018 Scottish Cup Final versus Celtic.

When Carl McHugh gave up the captaincy at the beginning of the 2018/19 season as he felt it had impacted his performances, Peter would resume the role as he was named the new captain.

On the lead up to a league fixture against Rangers he made comments about one of their players who was injured in the League Cup Semi Final against the sides the previous year, clearly meant in jest all media outlets picked up the interview and he was swiftly made to be enemy number one by the fans of the Govan side. Funnily enough a few days later, the side were trailing 2-3 to the Gers until the side got a corner deep into injury time, Hartley of course popped up and smashed the ball home for an equaliser which resulted in wild celebrations in the stands.

Peter struggled somewhat to recapture his early form before his injury and when manager Stephen Robinson changed the line up to be a more attacking outlet he preferred to use the centre back partnership of Tom Aldred and Charles Dunne.

Prior to joining Motherwell, the Englishman had progressed through the youth ranks at Sunderland and he would serve Chesterfield (loan), his hometown club Hartlepool United, Stevenage, Plymouth Argyle, Bristol Rovers and Blackpool.