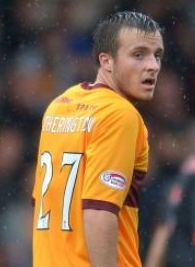 Born in Hartlepool, it was with his hometown club that Steven Hetherington began his football career before moving north of the border to join SPL side Rangers. Struggling to break into the first team fold at Ibrox he was allowed to leave the club in July 2011. After a trial with Motherwell he was offered a contract with the club, despite not making a first team appearance throughout the 2011/12 campaign his performances in the u19’s and reserve side were enough to earn him an extension to his contract. He would make his Motherwell debut early in the 2012/13 season coming on as a substitute in a 1-1 draw against St Johnstone. He would follow this up with further appearances against Kilmarnock and St Mirren and even enjoyed playing a full ninety minutes in a Europa League game against Levante in Spain. Despite this he would struggle to break into a settled ‘well side and was allowed to join local rivals Airdrie United on loan. Surplus to requirements he was allowed to leave the club at the end of the season.