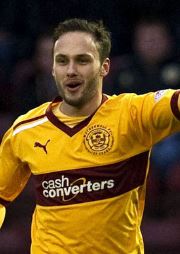 Son of Rangers legend Mark Hateley, Tom began his career in England with Reading but unable to break into the first team fold at the Madejeski Stadium he was farmed out on loan to Basingstoke Town before being allowed to leave on a free transfer. He had actually had a trial with neighbours Hamilton Accies but Tom didn’t finish this due to a family bereavement. As new Motherwell manager Jim Gannon looked to build a new squad for the 2009/10 campaign he brought the young Englishman in on trial, he quickly impressed and was offered a one year deal.

Set to start on the bench on the opening day of the season, tom was handed an unexpected starting place as young winger Paul Slane got injured in the warm up. Slotting into an unfamiliar right back position he would put in a fine display as ‘Well drew 2-2 with newly promoted St Johnstone at McDiarmid Park. He would soon revert to a familiar midfield role after the club secured the services of Yassin Moutaouakil.

Tom scored his first goal for the club with a stunning free kick in a 1-1 draw against Rangers, he also got on the scoresheet in the amazing 6-6 draw against Hibernian. His long floated free kick looked to be sailing straight through to former ‘Well keeper Graeme Smith but he misjudged it and it went straight in the goal to make the score line 6-5. Tom wouldn’t miss a single match throughout that entire campaign and was a consistent performer throughout, he was awarded a new three year deal.

Despite preferring to play in a midfield role he would find himself more often than not deployed at right back. He always fancied taking set pieces, he did manage to score a delightful free kick in Europe against Odense with virtually the last kick of the ball to send the ‘Well fans who travelled to Denmark into bedlam. He also managed to score direct from a corner kick a feat which he did twice.

Impressively it wasn’t until early in the 2012/13 season until he would miss a competitive game, a run of SPL and European games would take their toll on the small squad and he was forced to watch from the stand.

In his 4 years at Fir Park he had many highlights, getting to the Scottish Cup Final in 2011, playing in the Champions League & Europa League (Twice), helping the club achieve 3rd place and a runners up spot in 2012/13.

According to his agent he had many suitors vying for his signature, along with Michael Higdon he indicated he would not return to the club for the 2013/14 campaign as he was looking to move onto pastures new. Tom played over 170 games for the club netting 12 times. He seemed to struggle to find a club over the summer before finally signing a short term deal with English League 1 side Tranmere Rovers.