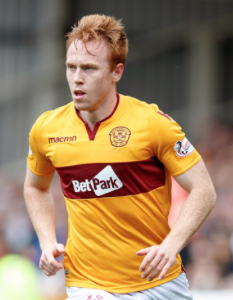 A summer recruit for the 2018/19 season, Middlesbrough born forward Danny Johnson arrived at Fir Park from Gateshead, he had followed the route of many who in previous seasons arrived at the club for a nominal fee coming straight from the English National League.

The lively attacker had an impressive goal haul with Guisborough which helped him secure a big move to Cardiff City but he was unable to make the breakthrough in Wales.

He enjoyed a more fruitful time with Gateshead where he got back on the goalscoring trail netting an impressive 52 goals in three seasons.

Danny made his Motherwell debut against Edinburgh City in the League Cup, scoring his first goal for the club in the same competition only a week later when he netted an important goal against Clyde at Broadwood as the side looked to be facing a premature exit from the competition.

He initially struggled to displace the partnership of Curtis Main and Ryan Bowman but as he got to grips with the pace and upped his own fitness to cope with the demands of the Scottish game he started to score some important goals namely a double against Aberdeen as well as scoring against both halves of the Old Firm, he showed all the traits to be a fine poacher, he struggled to fit into the way manager Stephen Robinson wanted to play.

A change of formation in the second half of the 2018/19 season would limit his chances as only one forward was selected to play, teenage striker James Scott moved in front of him in the pecking order and from late January until the end of the season Danny was restricted to only a handful of appearances. In July 2019 he was allowed to leave the club, he would subsequently join Championship side, Dundee.