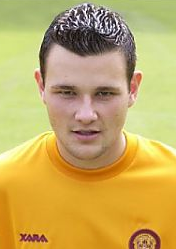 Son of Dunfermline Athletics’ legend Ross Jack, Darren Jack began his career with Ross County where the young striker was only able to make one appearance. There was a lot of dispute over this signing as it came just a matter of months after Motherwell went into administration and had released 19 players. His debut came at Ibrox on the 19th October 2002 when he appeared as a substitute as Motherwell were defeated 3-0 at Ibrox. He had another appearance the following week in a 5-1 defeat by Livingston, he quickly faded from the scene and left the club under a cloud in 2003. Darren had brief spells with Sligo Rovers and Barnsley before bowing out of the senior game.