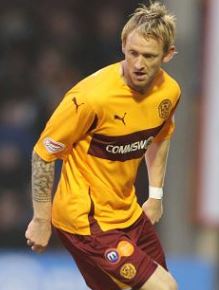 Veteran winger, Steve Jones was signed on loan by Stuart McCall in January 2011 shortly after taking over the manager’s role at the club. McCall had identified the squad needed a natural left sided player, the pair had previously worked together at Bradford City. Steve had spent most of his career in the lower leagues in England having served the likes of Crewe, Burnley and Walsall. He certainly proved to be a decent acquisition, he could play as a winger or up front, he had a few tricks up his sleeve and was prepared to take players on. He made his debut in a 2-0 win over Hibernian. Steve would also score in a Scottish Cup tie against Stranraer on route to the 2011 Scottish Cup Final where Jones would of course make his last appearance for the club collecting a runners up medal. Despite being out of contract at Walsall, McCall decided to look at other targets in the summer. Steve would make 17 appearances scoring twice. He had been capped 29 times for Northern Ireland.