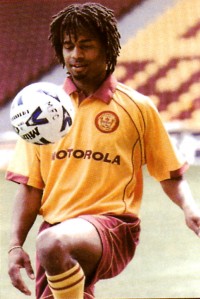 The day before Benito Kemble joined the Steelmen, Aberdeen faced off against Motherwell at Fir Park, the Dons hadn’t won a league game in nine attempts but managed to secure a 6-5 win over the Steelmen.

Born in Nieuw-Nickerie, Suriname in August 1968, Kemble was signed by Billy Davies to strengthen his defensive options. The defender was actually spotted by Motherwell while playing on trial for English side Tranmere Rovers. He made his Motherwell debut against Dundee United at Tannadice in a game which the ‘Well won 2-0.

Benito spent the majority of his career in the Netherlands serving the likes of NEC Nijmegan, VVV and FC Eindhoven. He was a solid defender, who was popular with the fans. In his two years in Lanarkshire he played in 50 games and scored the one goal, this came in a heavy defeat against Rangers at Ibrox. Kemble picked up a serious knee injury which cost him his place in the first team. On the international scene he played for his country on 30 occasions.

Billy Davies decided to release him at the end of the 2000/01 season. It was St Johnstone who quickly snapped him up, but sadly his knee injury came back to haunt him and Billy Stark released him nearing the end of 2001/02 season, he made 14 appearances for the Perth Saint’s as they slipped to relegation. He was invited to train with Motherwell for the remainder of the season. His career would soon fizzle out after a year playing in America with Syracuse.