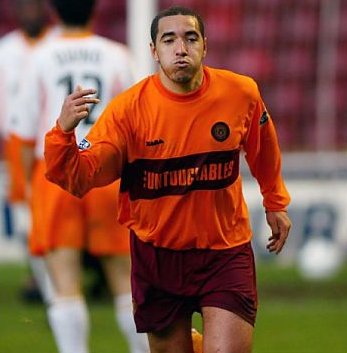 Khaled Kemas first came to Scotland in late 2001 to join Ivano Bonetti’s continental Dundee side. In his short career at Dens Park, the forward only managed to score one goal and this came in a 4-2 defeat by Motherwell at Fir Park. In the summer of 2002 he left Dundee when Terry Butcher stepped in and brought him to Motherwell despite Bonetti trying to persuade him to do otherwise.

It took Khaled until the end of October to pull on a claret and amber jersey when he lined up for the under 21s against Rangers. This was how long it took him to recover from an injury picked up in the summer while playing for Algeria, an injury that took much longer to recover than was originally diagnosed. In his full debut against Livingston at Fir Park he scored an absolute cracker of a volley, but sadly the ‘Well lost 1-5. He proved to be a tricky striker, but sadly he lacked pace and found it quite hard to cope with demands of the SPL. Throughout his time with Motherwell he was dogged by injury and at the end of the season Terry Butcher allowed him to move on. Kemas spent most of his career in the lower echelons of French football.