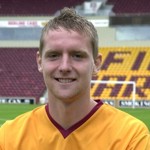 A product of the Motherwell youth system, William Kinniburgh was thrust into the first team fold as a teenager perhaps earlier than expected. When the club went into administration towards the end of the 2001/02 season, three centre-backs in the shape of Karl Ready, Greg Strong and Eddie Forrest all lost their jobs, Willie was given his debut against Dundee in the last match of the season as the Steelman ran out 2-1 winners.

Willie proved to be an able deputy when called upon. He scored his first goal for the club against Aberdeen in 2002. He never really ever carved out a first team berth at Fir Park, in 2003 he was loaned out to First Division side Ayr United. It was perhaps the 2005/06 season where he enjoyed a proper run in the side when he featured in 23 competitive fixtures including scoring in the exciting 4-4 draw against Celtic on the opening day.

After a short spell on loan to Partick Thistle in late 2007, Kinniburgh would subsequently join them on a permanent basis. In 2002 he decided to leave Firhill to take up a career as a Police Officer, Willie would continue his football career in the Juniors turning out for the like of Irvine Meadow and Cambuslang Rangers.

Willie had been capped by the Scotland U21 side earlier in his career. His brother Steven was also a football having served Rangers, Oxford United and Kettering Town.