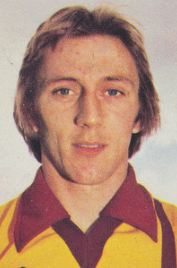 Mike Larnach’s career started with Campsie Black Watch Juveniles, before heading to Kilbowie with Clydebank. Capped by Scotland at youth level, his career showed early promise with him netting 62 goals in 160 outings for the Kilbowie Club. Because of this he found himself heading to Newcastle United. But sadly he wasn’t able recapture his form and soon found himself heading back north and this time with the ‘Well. He cost Motherwell £75,000 in 1978 and he made his debut in August of that year against Partick Thistle. Yet again he failed to show the goal scoring ability he had at Clydebank and also he had the misfortune to be in the Motherwell side defeated 8-0 at Pittodrie against Aberdeen. In September 1980 Mike was allowed to join Ayr United for £30,000, following former well team-mates Stuart Rennie and Jimmy Lindsay to Somerset Park. Ayr United freed him in 1983, he later played for both Stenhousemuir and Clydebank.