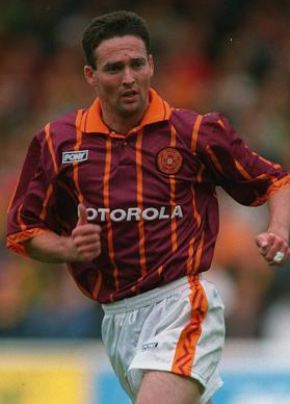 Paul Lambert was an excellent midfielder with Motherwell, perhaps the best to serve the ‘Well in that era. He started his career with St Mirren and he was outstanding for them. He won 11 Scotland under-21 caps while at Paisley. It was in September 1993 Motherwell signed Paul for £125,000. In the next few years he was to play in a great midfield. He was a wonderful team player and a great worker. In the summer of 1996, he was lost under the Bosman ruling, when obviously he was worth in excess of £1 million. He joined German side Borussia Dortmund (a club that Motherwell had played a year earlier in the UEFA Cup) while there, he won a European Cup Winners medal with them – the first British player to do so with a foreign club. He later returned to Scotland to join Celtic and with them he won a fair share of medals including the league title, Motherwell were given a fine example of what they were missing when he scored a wonderful goal for Celtic at Fir Park on 3rd October 1998 as they defeated the ‘Well 2-1.