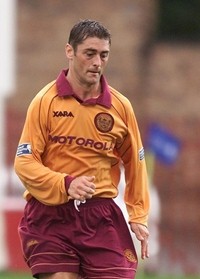 Tough tackling midfielder, Scott Leitch signed for the club, a couple of games into the 2001/02 season. A self-confessed Motherwell fan, Scott Leitch had played beside ‘Well manager Billy Davies at Dunfermline, so obviously the manager rated him highly enough to make him a key member of his midfield. Scott made his debut coming on as a sub in a 1-1 draw with Dundee United at Tannadice, He was a good leader and could organise the midfield. After Andy Goram left, there was no doubt in anyone’s mind that the new club captain would be Scott Leitch. He wasn’t much of a goal scorer, in fact it was on the opening day of season 2002/03 he scored his first ‘Well goal. This came in a 3-2 defeat against Livingston.

Scott’s two sons both played for the club, Jack would struggle to cement a first team place before moving onto Airdrieonians, Robbie wouldn’t play a first team team game but he did win the Scottish Youth Cup with Motherwell in 2016, the highly rated teenage midfielder was offered a deal with English Premiership Club Burnley which he couldn’t refuse.