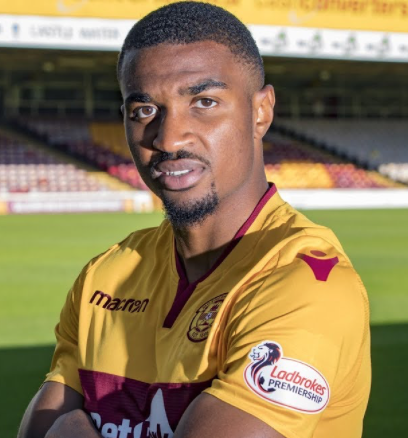 Christian Mbulu arrived at Fir Park in the summer of 2018, he impressed n a short trial with the club and was subsequently offered a one year deal, his early ‘Well career was spent playing in Stephen Craigan’s reserve side but as the 2018/19 season wore on he gradually appearing on the bench for the senior side.

Mbulu had played a part in helping the young side on their way to a Scottish Challenge Cup Quarter Final where they were beaten 1-2 by Ross County but had a few notable scalps on the way, Christian of course had netted a fine goal in the 2-0 home win over Sligo Rovers but was sent off against Ross County against a streetwise Ross County.

He made his top team debut in rather forgettable circumstances, he came on as a late substitute as the ‘Well were already down 1-7 versus Rangers at Ibrox, but his next appearance for the Steelmen was in a starting berth against Aberdeen which the side won magnificently 3-0.

Christian proved to be a strong center back with pace in abundance, just he started featuring for the side more regularly he suffered an eye injury on Boxing Day 2018 when the side faced Kilmarnock, he wouldn’t make another appearance for the club after this fixture.

Before arriving at Fir Park, the Englishman had served Brentwood Town where he quickly became a regular at the age of 17. Despite attracting many suitors he signed his first professional contract with Millwall on his 19th birthday. He was loaned out to Convey Island in 2016 and then Braintree Town in 2017 but he made no senior appearances at his time at The New Den.

After departing the club he moved onto English side Crewe Alexandra but after a short spell, he then signed for Morecambe. Sadly on the 26th May 2020, aged only 23 Christian sadly passed away.