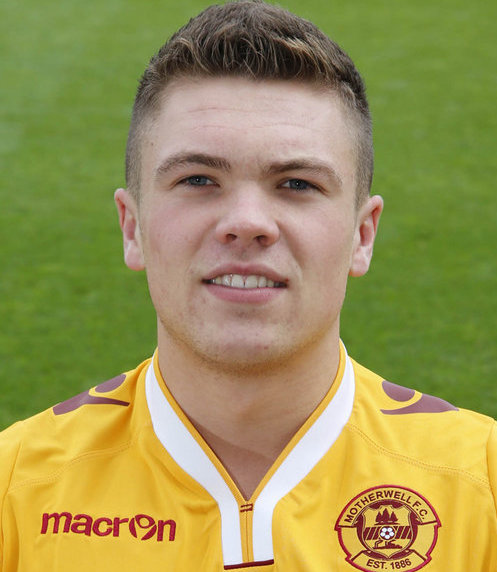 Craig Moore was a small forward who was in the Dougie Arnott type mould, he had initially been on the books at Hearts as a youngster but after being released due to concerns about his height he joined Motherwell where he would progress through the youth ranks and into the senior side.

Moore essentially came to the fore during a fruitful loan spell with 1st Division side Cowdenbeath whom he had initially joined on a one month loan in January 2013 but this was eventually extended until the end of the season, this spell brought a nice return of 7 goals in 12 first team outings. Motherwell rewarded the young striker with a new two deal.

Moore made his Motherwell debut appearing as a substitute in a European tie against Kuban Krasnodar in August 2013. Domestically he would hit the headlines in October of that season when he came on as a late sub in a league fixture against Hearts and with his first touch he smashed an absolute howitzer passed the helpless Jambos keeper. The media however ran with the story of his incredible first touch and goal dream league debut but in actual fact, Craig had made his league debut for the club on the 11th August 2013 in a 3-1 defeat at the hands of Aberdeen.

In Craig’s debut season he made 20 appearances, mostly all of which came from the bench with just that solitary goal to show for his efforts. The season would sadly end on a sour note as he suffered a cruciate ligament injury against Inverness on the penultimate game of the season.

His time at Motherwell he failed to really impose himself than anything more than a fringe player, it looked like the bad injury he sustained had taken a toll, the club sent him out on loan to Ayr United during the 2015/16 season and he helped the Honest Men win promotion to the Scottish Championship, due to his impressive spell he was given a contract extension at Fir Park but was quickly farmed back out on loan to Ayr United for another season. Sadly Moore suffered a head injury which would keep him out for half of the campaign.

At the end of the 2016/17 season, Moore was told he would not be retained by the club, Ayr United quickly offered him a one year deal which he duly accepted.