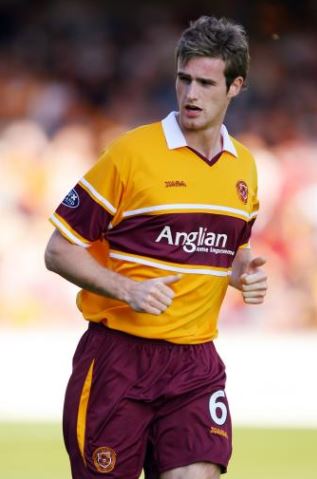 Tall defender, Brian started his career with Rangers progressing through the clubs youth ranks but couldn’t break into the first team. Terry Butcher threw him a lifeline and snapped him up on loan for a season in 2005/06. He showed up really well in early games providing excellent cover for regular centre backs Martyn Corrigan and Stephen Craigan. After an impressive season Terry Butcher managed to sign him on a permanent contract but was struck down with a cruciate ligament injury in September 2006. Upon his return to first team duties months later he was thrust right into first team action but sadly within minutes into a game against hearts he landed awkwardly and was ruled out for the season, with similar ligament injuries. Under Mark McGhee in 2007/08 he was rarely in the side but he won over the gaffer with sterling displays over Celtic, Rangers and Aberdeen but playing in a new position of right full back. In Pre-Season 2008 as Motherwell went to Austria, he suffered ligament injury number three as he suffered from a horrific tackle in match against Romanian side Cluj and was instantly ruled out for almost all the 2008/09 season. Despite being born in Rutherglen, Scotland and having been capped for Scotland under 17’s, he was eligible to play for Northern Ireland through a family member. Before his 21st birthday in 2006 he won his first full cap for Northern Ireland as he appeared as a 2nd half substitute against Estonia, but was later ruled ineligible to play for Northern Ireland by FIFA.