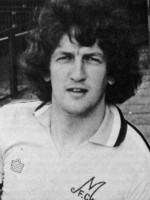 Colin joined the ‘Well in June 1975 from Dumbarton and it cost £50,000 and he proved to be a great signing. His brother was called Tom who later joined Motherwell in 1986, he played in the same positions centre forward and centre half. A Strong forceful player, firm in the tackle and dangerous on the attack. An ankle injury curtailed much of his debut Season. His record of three goals in over fifty appearances was scant reward, especially when compared with what he later achieved with Partick Thistle. It was indeed in March 1978, when he joined the Maryhill side for £25,000. He also went on to serve Rangers and Hearts. He left Motherwell giving the impression he was a player who was not properly used by the club.