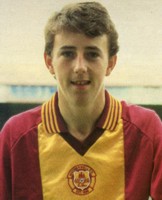 Born on Christmas Day 1964 in Motherwell, Gary McAllister joined the ‘Well from Fir Park Boys Club in 1981. He made his debut within months and by 1985 he was such as important part of the side which won the first division under the leadership of Tommy McLean. His first league goal took a long time in coming, it came in August 1984 against Kilmarnock. Sadly he became a victim of Motherwell’s financial insecurity in the mid-1980s and he was sold before he reached his peak. Both Gary and Ally Mauchlen were sold to Leicester City just one game into the Premier Division campaign of 1985/86.

By 1993 he was Scotland captain and he was gearing up for his side’s Euro 96 campaign. Sadly, Gary missed a key penalty for the Scots’ against England at Wembley and Scotland went down 2-0. In 2001 Liverpool reached the UEFA Cup final what a part Gary played as he scored late in extra time and the score was Liverpool 4 Alaves 3. Liverpool also won the FA Cup and League Cup that season. In 2002, he was named new Coventry City player/manager and his assistant was Eric Black who had just recently resigned from the manager’s job at Fir Park.