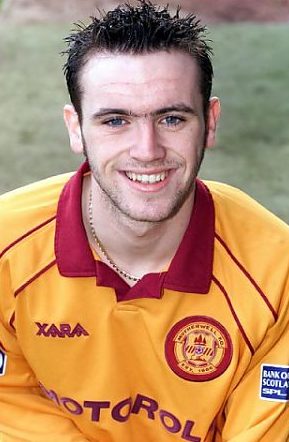 James’ Motherwell debut came on 26th December 2000. Only 17 at the time, he came on as a substitute in a 3-0 defeat by Dundee. Later that season, his first start came when Motherwell played Rangers at Fir Park. James lined up at left back to replace the injured Stevie Hammell. After a solid ‘Well performance, two late goals gave Rangers the 2-1 victory. Under Eric Black the following season, he made the breakthrough. He came on as a substitute against Aberdeen on 24th November 2001 and snatched a late winner to make the score 3-2 and give Motherwell the victory. He soon found some more goals netted against Livingston and St Johnstone in later weeks. Faddy proved to be a useful player. He was left footed, but was happy to feature anywhere in midfield or up front. A nightmare and real menace to the opposition defence, He could turn a defender inside out in a blink of an eye. At the end of the 2001/02 season the whole of Scotland was raving about this youngster. He was even called up to the senior Scotland squad as they headed to Japan, just before the 2002 World Cup, he made his debut against South Africa. It ended on a low note as he missed his flight home and this was much publicised in the press.

The following season was to be his first as a first team regular. He did well early on, but only managed to net one goal in five games. That changed, however in September 2002 as Celtic were crushed 2-1 by a magnificent young ‘Well side. The whole of Scotland seemed to want this talented youngster back in the Scotland side. Although Motherwell were in administration, James was obviously worth in excess of £1 million. Teams were offering silly amounts like £400,000. This mostly coming from former Scotland manager Craig Brown’s Preston North End. During the 2002/03 season, Motherwell went on a great Scottish Cup run. McFadden scored against Kilmarnock in the third round, he scored both in the fourth round 2-0 win over Clyde and once in the 4-0 demolition of Stranraer. In the semi-final, Motherwell were drawn against Rangers, which saw an amazing 4-3 match, Faddy scored a cracker, but sadly couldn’t help the team get into the final.

Throughout the season, members of the press and even national coach Berti Vogts commented on how McFadden needed to calm down a bit and gain more maturity. This was because of his poor disciplinary record and his constant arguing with referees. On the final day of the season, Captain Martyn Corrigan was being substituted off and he handed the captains armband to James McFadden. From there Livingston kicked off just after conceding a goal, Faddy intercepted and took the ball on a mazy run past five players and scored an amazing goal. Motherwell won 6-2 that day and McFadden scored his first senior hat-trick. The following season James had netted three goals in three games before Davie Moyes at Everton signed him for £1.25 million. Clearly a bargain for the Liverpool side. He was signed mere 15 minutes before the transfer window closed. A few days later he came off the bench for Scotland and scored his first international goal in a 3-1 win over the Faroe Islands.