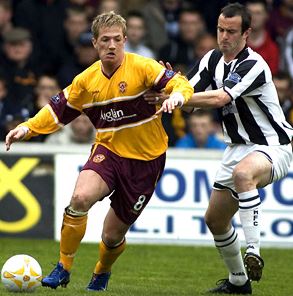 Talented young forward, Maurice Malpas signed Ross McCormack on the 10th July 2006 for an undisclosed fee from Rangers as there new manager Paul Le Guen said he didn’t feature in his plans. His claim to fame at Ibrox must have been scoring the equalizing goal in the 2005/06 Champions League Match against FC Porto.

Ross actually made his first team debut against Motherwell in April 2004, ironically his Motherwell debut would see him line up against Rangers, but sadly that result went in favour of the men from Govan. Most of the 2006/07 season seemed to be curtailed by small niggling injuries only return to first team duties to be struck down with a mystery virus which threatened his career. Upon returning to the side he did however score a few goals, 1 against St Johnstone in the Scottish Cup and Against St Mirren in the SPL. Under the management of Mark McGhee the following season Ross flourished in the side as the attacking direct formation on show suited him to a tee and with the likes of Davie Clarkson and Chris Porter Up Front partnering him, it benefitted the side greatly. Pacey and direct with loads of tricks up his sleeve, he had a good eye for goal and was not too bad from set pieces. Probably his two best goals in the Claret and Amber was a long ranger in the League Cup against Raith Rovers and a stunning free kick against Hibernian. In January 2008 English Premiership sides Middlesbrough and Wigan Athletic seemed to shoe great interest in signing him and this seemed to interrupt his form as his performances dropped greatly. His heart seemed to be set on going elsewhere but he did however commit to the Steelmen until the end of the campaign and helped fire them into the Europe for the first time in 13 years.

As the season had came to an end an extra bonus for Ross was getting called up into the Full Scotland squad where he would win a cap against Czech Republic along with team mate Davie Clarkson. Sadly the Scots lost 3-1. Despite the best efforts of Mark McGhee, Ross left the club in the summer of 2008 to join Welsh outfit Cardiff City.