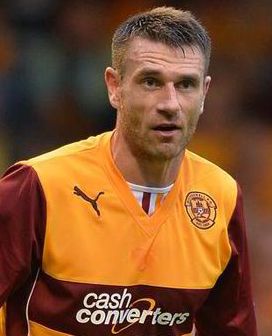 The club had beaten off competition from Hibernian to secure the services of Stephen McManus in July 2013. The centre back had vast experience as he had progressed through the youth sides at Celtic before becoming a regular in the first team where not only did he play over 200 games in all competitions but he was also their captain who had won the league title and both domestic cups not to mention having plenty experience in European competition.

Capped 26 times by Scotland, Stephen eventually fell out of favour at Celtic so he tried his luck in the English Championship with Middlesbrough where he linked up with his former boss from Parkhead, Gordon Strachan.

After a few loan spells at Bristol City, he returned to Scotland in 2013 looking for a move, initially he trained with Motherwell for a spell then headed to Edinburgh to Easter Road to train with both clubs vying for his signature.

McManus enjoyed a fruitful first season at Fir Park where he would only miss one league fixture. Despite not hitting the heights of his days at Celtic he proved to be a fine defender and he was a key component in a side that would clinch 2nd place in the Premiership table. He was a robust defender who enjoyed an aerial dual, he made his ‘Well debut in a Europa League fixture when the side were beaten 0-2 at home, domestically he made his league debut against the side that tried to sign him in the Summer as the side defeated Hibs 1-0 at Easter Road. It was the same opposition that he would score his first goal against when he netted a header in the return match at Fir Park in November 2013.

Following on from his successful first season his performances were some what mixed, on the top of his game he was dominant in the air but the 2014/15 season saw the side as a whole struggle and relegation was narrowly avoided, it took a playoff against Rangers to avoid it. Over two legs the side recorded a stunning 6-1 aggregate win, McManus scored a delightful header in the game at Ibrox in which he arrowed the ball into the corner of the net from a Marvin Johnson free kick.

During the 2015/16 season he struck up a fine partnership with Academy graduate Ben Hall who broke through as the season progressed, the youngster certainly flourished under the former Scotland internationals guidance as the side went onto secure a top six finish.

Despite seldom missing games he suffered an injury at Celtic Park after only a matter of minutes in February 2017 which effectively ended his season, which was a massive blow in the sides fight against relegation. Despite returning to action during the 2017/18 pre season, Mick would only play one competitive game which came against Edinburgh City in the League Cup as the 34 year old would hang up his boots as he was offered a new role coaching some of the youth sides at the club which he would accept. Stephen would later admit he knew his time was up after his last competitive game. He made 156 first team appearances for Motherwell scoring 6 goals.

In 2019 he made a return to Celtic to take up a coaching role within the youth setup.