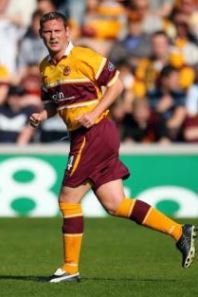 Paisley born Forward, Steven McGarry began his career with his boyhood heroes St Mirren where he would play over 150 first team games and was viewed as a player with plenty potential. Perhaps the biggest highlight of stay with the Buddies was helping them secure promotion from the First Division to the Scottish Premier League in 2000, the side from Love Streets stay wouldn’t be too long as they slipped to immediate relegation.

It was in January 2006 when McGarry signed for Motherwell, manager Terry Butcher who was eager to add some experienced firepower to his strike force plucked Steven from First Division side Ross County, he arrived at the club at the same time as Abel Thermeus.

McGarry made his first team debut against Dunfermline in a 1-1 draw not long after signing on the dotted line, but in truth he really struggled to impose himself and found himself on the fringes as he couldn’t break up the partnership of Scott McDonald and Jim Hamilton, Steve would however prove to be a versatile player as he was often deployed as a left midfielder or winger, a position he looked comfortable playing in.

He enjoyed his best football at Motherwell playing under the guidance of Mark McGhee. A criticism that was often thrown at him during the Malpas reign was that he appeared unfit, when McGhee took over he implemented a stricter fitness regime and gave Steve an ultimatum that he improve himself or he would be out the door, needless to say McGarry relished the challenge and came back like a new player, playing a pivotal role for the club during the 2007/08 season as they would secure 3rd place in the SPL and secure European football at Fir Park for the first time in over a decade. The side played some delightful attacking football that season with the 4-3-3 formation. On the opening day of the campaign, Steve enjoyed scoring the winner against his former employers St Mirren.

Not the most glamorous of players to represent the club but you couldn’t fault him for giving anything less that 100% to the cause. Perhaps the main disappointment was his lack of goals.

When Jim Gannon became manager in the close season of 2009 he made it quite clear that Steve and many other senior players weren’t in his plans, he was seldom selected before moving on to the A-League in Australia where he joined Perth Glory FC.