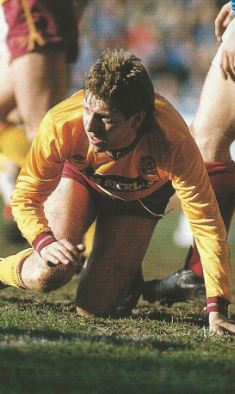 Tom McAdam started his career as a 16 year old at Dumbarton and he spent five years there before moving onto Dundee United. In 1977 Celtic snapped him up for £60,000 and he was to stay put for nine years. Tom played over 250 games for the ‘tic before heading down south with Stockport County, but he later returned to Scotland on the Douglas Park scene with Hamilton Accies. Motherwell were next up. He signed in 1986 and went on to play over one hundred games for the club. He was always capable of playing in defence or attack and it was this which made his partnership with Craig Paterson feature in Tommy McLean’s ‘Well, he joined Airdrie, where he began a coaching career, but shortly he returned to Parkhead.