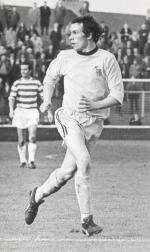 Willie signed for Motherwell in 1971 from Cumbernauld United. He was to stay for four years and went on to play in 67 competitive matches scoring 12 goals.

Willie McClymont was actually a youngster spotted by accident as the scout was detailed to watch his inside-forward partner Jim Gray. Gray had been recommended while playing with Eastercraigs in the Scottish Amateur League and a scout was deployed to check him out.

Both boys were signed but were swiftly moved onto Cumbernauld but their careers in the Juniors didn’t last long as they were given an outing in the opening League Cup fixture at Easter Road, both players of course wouldn’t look back from that point.