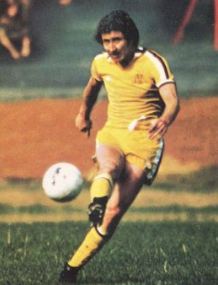 Willie McVie was signed from Clyde by Willie McLean. He was a strong, rugged no-nonsense centre-half, effective on the ground and in the air he was a big favourite with the ‘Well fans. His football career saw him starting at Lesmahagow Juniors, before moving onto Archie Robertson’s Clyde where he spent five years. In 1975, Willie McLean signed him for Motherwell for £35,000. In 1979, he moved to the American Football League, along with fellow ‘war-horses’ Drew Busby and Jimmy Bone, signing for Toronto Blizzard. His career ended at Blantyre Victoria, and in 1982, he won a Scottish Junior Cup medal.