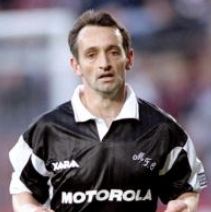 Pat Nevin was the first ever person to be a player/chief executive at a club. Pat Nevin has enjoyed a fabulous career in football. He was signed by former Scotland manager Craig Brown in 1979 for Clyde. He was the subject of the first ever tribunal when Chelsea signed him with Clyde asking for £200,000 and the London club offering only £50,000. The fee settled upon by the tribunal was £95,000. He was instrumental in helping Chelsea win promotion to the 1st division and enjoyed a tremendous rapport with the fans. Pat went on to play with Everton, Tranmere and also Kilmarnock taking up the role as player/chief executive at Motherwell.