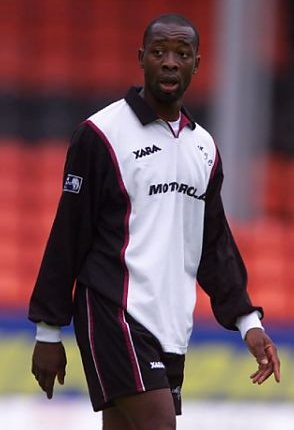 Manager, Billy Davies brought Ange Oueifio to the club on trial at the start of the 2000/01 season and he would play in two pre-season friendlies against English side Huddersfield Town and Livingston, in both matches he came on as 2nd half substitutes but he seemed to do enough to impress the management in that he was offered a 2 year deal.

Ange could play either at centre or right back, he made his debut against Dundee in the opening fixture of the 2000/01 season, he was a strong and athletic defender who made a decent first impression but after getting sent off at Tynecastle in a 3-0 defeat to Hearts things started to turn somewhat sour. Whether or not it was down to a lack of confidence his performances started to suffer, Davies tried to play him in a midfield role at one point and when this failed Oueifio just seemed to vanish from the scene.

Despite making twenty appearances during his first season he wouldn’t play a single game in the 2001/02 season and he was one of the 19 players to be released when Motherwell went into administration. His brother Willi played briefly for Hearts during the 2002/03 season.