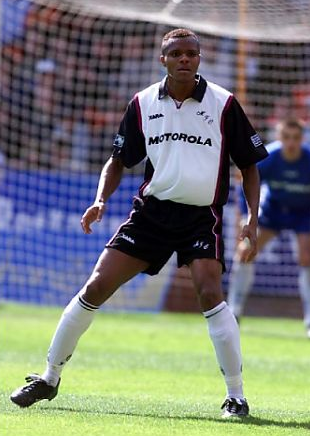 James Okoli arrived at Fir Park on a short term contract towards the end of the 2000/01 season as Billy Davies tried to strengthen the playing squad as the side pushed to try and secure a top six finish in the SPL. The Nigerian was a tall robust centre back who had previous experience in the Netherlands, Greece and Germany. He made his debut against Rangers on the 17th March 2001 as the side lost 2-1, conceding a goal in the last minute.

Okoli would only play five games in total for the Steelmen, one win over St Johnstone and four defeats against Rangers, Hearts, Aberdeen and Dundee United respectively. After receiving a red card at Tannadice he wouldn’t make any further appearances for the club.

He was somewhat a nomadic player as he never really settled anywhere, after departing Lanarkshire he had a brief spell with York City before making a return to Scottish football with Dumbarton which proved to be even shorter than his time at Fir Park.