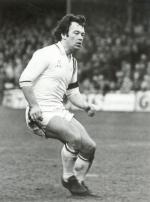 Born in Edinburgh on the 18th September 1946, Striker Jimmy O’Rourke is perhaps better know for his association with Hibernian. Plucked straight from schools football in 1962, Jimmy made his Hibs debut at the age of 16 setting a new record for the youngest player to represent the Easter Road club, a record which he kept for over four decades.

A bustling forward, he flourished under the guidance of Eddie Turnbull. Despite suffering the disappointment of losing the 1972 Scottish Cup Final when the Hibee’s fell to a 6-1 defeat by Celtic he did enjoy a degree of revenge as he scored in the League Cup Final later in the year as both clubs met again, this time Hibs came out on top.

The former Scotland youth international was controversially sold to St Johnstone for a lowly fee of £15,000, essentially he had to make way for Joe Harper who arrived at the club for a significant sum from Everton. At Muirton Park he helped the Saints win promotion, In July 1979 it was Willie McLean who brought him to Fir Park in a deal which saw Ian Taylor head to Perth.

Jimmy was comfortable playing at either centre and inside forward, he wasn’t particularly athletic nor was he tall, but he did have a tremendous eye for goal. He enjoyed a fruitful league debut for the Steelmen as he scored twice against Ayr United in a 4-1 win.

O’Rourke was a player of quality but the 29 year old would only manage two seasons at Fir Park due to frustrations with injuries. Perhaps a couple of highlights worth a mention was scoring a hat trick in the exciting 5-4 win over Kilmarnock, furthermore he scored the winner against Celtic at Parkhead in a new year fixture.

After his departure from Lanarkshire he would hang up his boots and become a coach at Hibernian where he was reunited with his old mentor Eddie Turnbull.