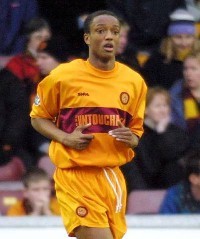 Richard Offiong came through the youth setup at St James Park with Newcastle United, unable to break into the first team he had been farmed out on loan to near by neighbours Darlington where he scored 4 goals in 9 games in the early part of the 2002/03 season, he joined Motherwell in January 2003 as Terry Butcher looked to add additional options up front as Stevie Ferguson returned to Tottenham after his loan expired.

Offiong had represented England at under-17, under-19 and under 20 level prior to joining the club and he was only 18 years old with many stating the youngster had a bright future ahead of him. He made his debut on February 2nd as Motherwell lost 1-2 to Dundee United, his start to life at Motherwell wasn’t ideal as an injury would sideline him for almost a month.

Upon his return his ‘Well career would see him feature regularly from the bench as all ten of his appearances came from being a substitute. He clearly had a few assets in his locker such as a frightening turn of pace but sadly it wasn’t seen often enough to cope with the level of football. Perhaps a highlight during his spell was to feature in the Scottish Cup Semi Final tie where he setup Derek Adams to score late in the game, ultimately however the Steelmen crashed to a 3-4 defeat at Hampden.

Richard became a bit of a nomadic player, he was released by Newcastle in 2004 and found it hard to settle at any club, it is with perhaps Hamilton Accies where he enjoyed his best spell, playing over 100 first team games he helped the New Douglas Park outfit gain promotion to the SPL. His form didn’t go unnoticed as Carlisle United were tempted to spend £75,000 for his services.