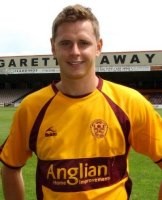 Mark McGhee signed Chris Porter in July 2007 which proved to be a great coup for the club as he arrived on a free transfer. He had been a star striker for previous club Oldham Athletic and a number of clubs down south were keen to sign him. Dundee United were also courting the young Englishman, this angered Oldham who argued that under Fifa rules they would be entitled to a transfer fee as the player wasn’t moving abroad & that he was under the age of 24. However a move to Scotland was regarded as a “cross border transfer” by FIFA and they said no fee would be required if he did indeed move to a club north of the border. Chris turned down the chance of a move to join Dundee United and signed a 2 year deal with Motherwell. It was rumoured ‘Well chairman John Boyle was paying a chunk of Porters wages out of his own pocket.

Porter would have a fantastic first season, he would make his debut in the opening day of the 2007/08 season in a 1-0 victory over St Mirren at Love Street. His first goal for the club came in a 2-1 victory over Gretna. Chris would finish the season having netted 18 goals in all competitions. In the process he helped the club finish 3rd in the table which secured a European place, the first time since 1995.

Despite the 2008/09 campaign not being as successful for the club on the whole, Chris still performed at a high standard and attracted interest from SPL rivals Hearts and various English Championship clubs. In January 2009 after nearly putting pen to paper on a move to Cardiff City, Derby County would hijack the move and he would later sign for the rams for a fee reported to be in the region of £400.000. Sadly his time at Pride Park was hampered by a hip injury.