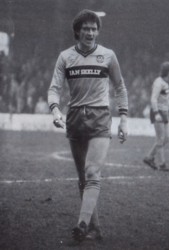 Craig Paterson started his senior career at Easter Road with Hibernian. He was a Scotland under 21 international when Rangers signed him. He joined Motherwell in 1986 and it cost Motherwell a fee of around £20,000. Craig 6ft tall was excellent in the air, he gave Tommy McLean the solidarity at the back and his partnership with Tom McAdam was a defensive cornerstone at Fir Park. He was a Scottish Cup winner at Motherwell in 1991, sadly he fell foul to McLean and he was sold to Kilmarnock in October 1991. While at Rangers he won a League Cup medal.