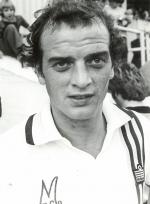 Ian Purdie was born in Motherwell in 1953, but it was actually with Aberdeen where he got his break into senior football in 1971, he wouldn’t link up at Fir Park until 1977 after signing from Dundee. He was rather slender and was a player who had to rely on his technique rather than his brawn for goals, but he could hit a venomous shot with his left foot. For the first half of season 1977/78, he was rarely absent. He had scored goals against Ayr United, Partick Thistle and Dundee United. After just over a dozen appearances for the ‘Well Ian tried his luck in England with Wigan Athletic. He played just over 50 matches for them and he netted 12 times before making a move to Portsmouth, he retired not so long later in 1979.