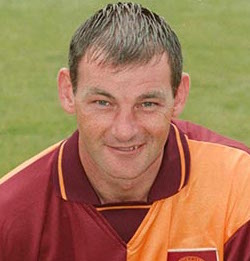 Tommy McLean brought John Philliben back to Scotland in 1986. He was then playing for Doncaster Rovers, he had played just over 70 matches for the South Yorkshire side. His Motherwell league debut came on 6th September 1986 at Fir Park against Rangers. Although a central defender he has played several times at full back. He can look back on the two wonder goals for the ‘Well – against Rangers and Greenock Morton. Two years at Stirling Albion as player/manager ended with John getting Sacked, but quickly returned to football with a coaching role at Motherwell. When Billy Davies was sacked, John and Miodrag Krivokapic took over as caretaker manager’s position and were tipped to go full time but it didn’t end well for John and Miodrag as they were sacked in favour of Eric Black. After this, John quit football and took up a job as a driving instructor.

Was rewarded with a testimonial against West Ham for his sterling service.