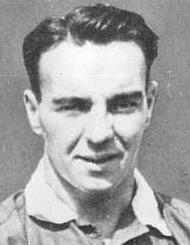 Like many others around the same time, Johnny Porteous found his football career interrupted by World War 2, by the time the Scottish game officially kicked back off he was 24 years old. Born in Motherwell on the 5th December 1921, the wing half actually began his footballing career with his hometown club but it was with Plymouth Argyle in the south coast of England that he his better remembered as he proved to be a versatile player who played well over 200 appearances helping the club win the Third Division South in 1951/52.

At Fir Park he was stuck on the fringes of the side and would only make a solitary appearance for the club and this came in a 0-1 defeat at the hands of Morton in April 1948, a matter of months later he would depart for Alloa Athletic where he managed to cement a place in the first team. Before retiring, Johnny would also serve Exeter City and Truro City.