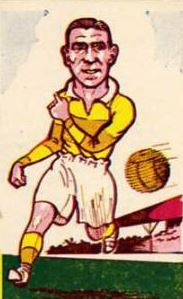 Tall and well built right-half, Willie Paton (not to be confused with the Rangers striker who played at the same time) joined Motherwell from Bo’ness United at the end of 1947. Unfortunately he was vying for the same positions in the shape of McLeod, Cox and Redpath which of course would limited his appearances. When called upon, Willie did show that he was worthy of first team services, but he would perhaps have benefited greatly had he opted to play his football elsewhere. Willie was released by the club in 1950, his next port of call was in joining English side Yeovil Town.