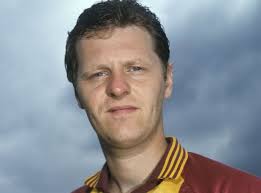 Andy Ritchie arrived at Fir Park in July 1983 when manager Jock Wallace spent £30,000 to secure the forwards services, however after a disappointing spell he was released in January 1984.

As a teenager, Andy was highly sought after, he had trials with both Old Firm sides, Coventry City, Everton, Manchester United and Middlesbrough before he decided Celtic was the ideal club to begin his senior career with.

Under the guidance of Jock Stein he was farmed out on loan to Junior outfit Kirkintilloch Rob Roy, despite returning to Celtic Park he would break into the first team but failed to carve out a regular berth playing only the ten games.

Ritchie was an incredible talent, technically gifted from set pieces but his laid-back style bordered on lazy. His career perhaps so have offered so much more than it did.

A Scotland Under 21 international, Andy would make his mark with Benny Rooney’s Morton where would become a club legend as he played well over 200 games netting over a century of goals.

At Motherwell he couldn’t recapture the form that he displayed at Cappielow. Ritchie did however enjoy one memorable moment, in a league fixture against Rangers at Ibrox he scored from the spot in a game that Motherwell would go onto win 2-1. This result ultimately ended John Greig’s reign as manager of the Govan side. Somewhat surprisingly, ’Well manager Jock Wallace would be appointed the manager of Rangers.

After departing Lanarkshire, Andy’s career fizzled out as he had two short spells at Clydebank and East Stirlingshire before serving Albion Rovers in the dual role of player/manager. Only in his late 20’s he would retire from playing and eventually took up scouting and coaching roles at various English and Scottish clubs.