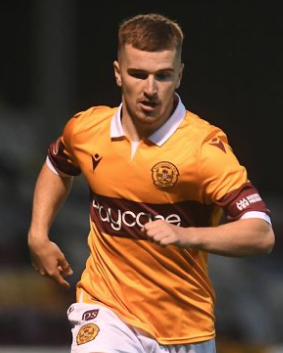 19 year old Harry Robinson arrived in North Lanarkshire in early 2020 after his release from English side Oldham Athletic. His father Stephen was actually the manager of the club and signed his son after he spent a short time on trial with the club.

The midfielder would make his debut in a 0-1 defeat against Dundee United but he would get to enjoy some European football in his next appearance as the Steelmen dispatched Northern Irish outfit Glentoran 5-1 in a Europa League fixture, Harry however was responsible for giving away a 90th minute penalty with an ill timed tackle.

Harry was farmed out on loan to Queen of the South in September 2020 but injury would curtail his spell at Palmerston Park. He was released by the club at the end of the season.

Despite signing for Clyde ahead of the 2021/22 season he was offered a job out-with football which he stated he couldn’t refuse and swiftly moved on.

Robinson had served Northern Ireland at U15, U16, U19 and U21 level. Before arriving in North Lanarkshire he had been on the books at Glentoran, Oldham Athletic and Crusaders.