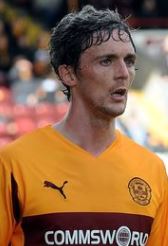 Dundee born full back Maurice Ross signed for the club on 1st April 2011 on a short term deal until the end of the season. He was pitched into first team action the following day against one of his former employers Aberdeen, he put in a solid performance as ‘well won 2-1. Maurice would play in all the clubs fixtures during April and would also play a part in the clubs 3-0 Scottish Cup Semi Final win over St Johnstone. He was curtailed by injury as the season came to a close and he would be allowed to move on. He played seven first team games for the club. Maurice had begun his career with Rangers and would play over 100 games for the club, he won every domestic honour at Ibrox. He would of course score the first goal in the 2005 League Cup Final as Rangers beat the Steelmen 5-1. Maurice had also been capped by Scotland 13 times. Upon Leaving Rangers he had spells with Sheffield Wednesday, Wolves, Millwall. Viking Stavanger, Kocaelispor, Aberdeen and Beijing Guoan. After he left Fir Park he had a spell at Livingston before joining Norwegian 2nd Division side FK Vidar. After retiring from playing in 2013, Maurice tried his hand at management which seen him manage various clubs in Norway and the Faroe Islands.