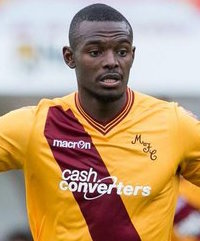 Theo Robinson signed for Motherwell in August 2015 and it was viewed as somewhat of a surprise. ‘Well gaffer Ian Baraclough opted to frequently play a 4-2-3-1 formation and already had an abundance of attacking options in the shape of Louis Moult, Scott McDonald, Wes Fletcher and David Clarkson who were all vying for the same position. Nevertheless the capture of Theo did seem like a coup as he had played for a number of good sides in the English Championship as well as being a Jamaican internationalist. Robinson said he was good friends with current players Lionel Ainsworth and Stephen Pearson so joining the club provided him with a great opportunity.

He was a pacy and direct striker who had all the essential tools to terrorise defenders in the Scottish Premiership but he was unfortunate that not sooner had he joined the club, manager Baraclough was axed and replaced by Mark McGhee, who for whatever reason just didn’t seem to have the Striker in his plans and he quickly fell out of favour. Theo was allowed to leave the club in January 2016, he was soon snapped up by English League One side Port Vale.

Robinson made his Motherwell debut in a 1-0 win over Kilmarnock, he would only make 11 appearances for the club without getting on the scoresheet.

Theo would hit the headlines during the 2016/17 season when he was playing for English National League side Lincoln City, the club went on a marvellous run in the FA Cup claiming some great scalps along the way which included knocking out League One side Oldham Athletic who were coincidentally managed by Stephen Robinson and his assistant Ian Baraclough. Championship sides Ipswich Town and Brighton and Hove Albion also fell victim to the Imps, Theo of course netted key goals in each of these games. This scoring form essentially won him a move back into the Football League as Southend United came calling.