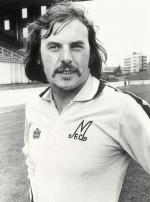 Signed from English outfit Preston North End just before the 1976/77 campaign got underway. Alex was a huge defender and was instantly recognisable with his long hair and moustache. Unfortunately for the big man first team opportunities were to prove very few indeed, he would never appear in a League fixture but did however make all of his 4 appearances in Cup competitions. Firstly in the League Cup in a 1-1 draw against Partick Thistle (14th August 1976) then Dundee (18th August 1976) His other appearances came in the Anglo Scottish Cup as ‘Well drew with Kilmarnock 1-1 then suffered a 4-0 reversal. Alex did however go onto enjoy playing in the Claret and Amber of Bradford City.