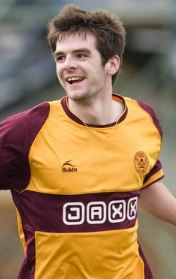 As highly rated striker Chris Porter was sold to Derby County in January 2009 manager Mark McGhee sought out to find an immediate replacement to fill the void left by the Englishman. He looked no further than Cillian Sheridan, a tall Irish Forward who at only 19 years old had already had experience in the SPL with Celtic and only a few months earlier had started in a Champions League game against Manchester United. Cillian joined on a on loan at the beginning of February, he would go on to play 15 first team games and proved to be a decent addition to the side as the Steelmen chased a top six league finish, sadly he would score just twice, firstly a stunning shot against Inverness CT and secondly a real poachers effort against Hamilton Academical.